Our stone planters really did not look good when we bought the house.  We knew it but in our blindness accompanied by falling in love with our dream house neglected to factor in the the reality of masonry work.  If you could have beer goggles for a house, we had them:-)
Last year, we decided to face the situation and make the stone planters a priority.  The planters continued to deteriorate during the 6 years since we bought the house and they looked even worse.  The original owner said that "someone ran into them with their car".  Not so much.  It took us awhile to realize that they were falling apart because of the freeze/thaw cycle in the winter.  So the more it went on, the worse they got.  You know how you get used to things around your house—even the things that don’t look so good?  And then you say to yourself “They don’t look THAT bad” or “Nobody really notices…”  Well, that was us.  But then I was shocked into reality when even my sweet MOM said something.  When that happened, I knew we needed to face the situation.
We interviewed 3 masons before selecting one.  I cannot remember the one bid but the two that we seriously considered were very close in cost.  One was an eastern European father/son duo—the father didn’t speak English so the son interpreted.  We liked them but the company we ended up going with is called “Stonelove”.   We liked the owner and their company had done some impressive work on a church in Buffalo.  Plus I liked that they approached the craft as an art rather than just a job.
These pictures are all during demolition of the planters:
But these guys earn every dollar—masonry is not a job that I would ever want to undertake myself. 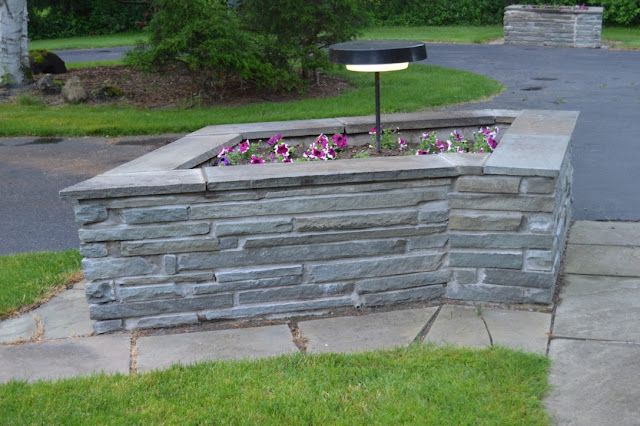 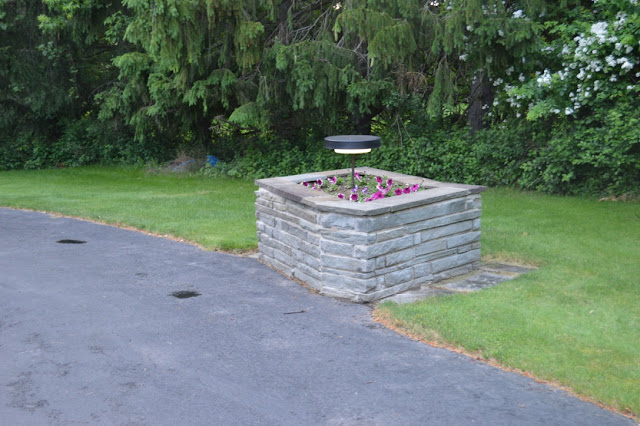 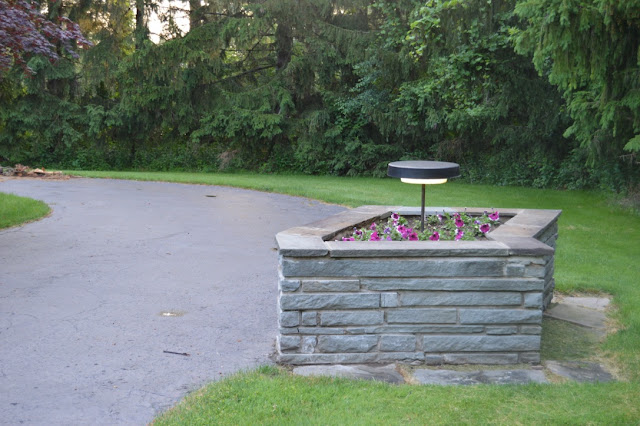 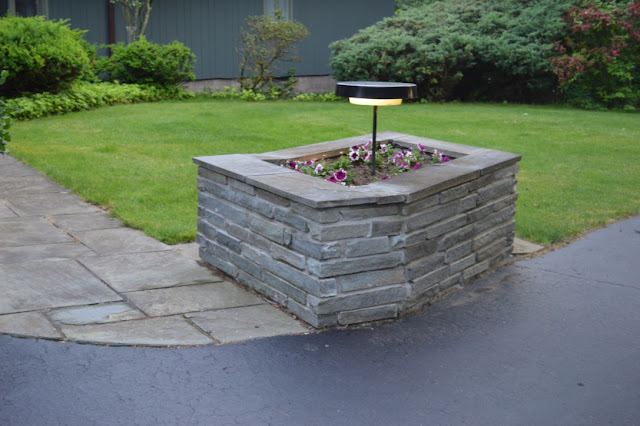 Here is what they did in addition to rebuilding the planters:
New light fixture:
We have cool light fixtures integrated within the stonework of the large planter.  Two of the three worked. We never knew why the last one did not work and this was an opportunity to replace it.  It turns out the original fixture was all corroded and not salvageable so I needed to find a new one in a hurry.  Problem is that these fixtures are not low voltage, which modern fixtures are.  They run off the line current in the house.  After an exhaustive internet search, I was actually able to find one that is nearly a perfect match for the original (hallelujah!) and with overnight shipping, it literally arrived an hour before the mason needed it.  Talk about just-in-time manufacturing.

Better drainage:
Now we have drainage pipe at the base of each planter to better allow the water to flow out of it, so the chance of it freezing and expanding in the winter is diminished.
Going forward, we have decided to cover the planters in the winter to keep snow and rain out of them as best we can.  I hope that we will enjoy many years with these planters without having to rebuild them again!!
I'll be sharing more Modchester projects soon.  Follow my blog if you want to know when new content is up.  What do you think of our "new" planters?

before and after landscape stone planters