April 08, 2013
I have been traveling a crazy amount lately--mostly for work but I did take a trip for fun to Philadelphia (where I'm from) and Washington, DC last week with my 11-year old daughter.  We were supposed to be there for the Cherry Blossoms but our cold weather in the east coast this year meant that they are weeks later than usual--all we saw were buds...bummer.

All of the other travel has taken me to Dallas, Chicago, Atlanta, and New Orleans--all places where they have cool stores that we don't have in Rochester.  I'll post some of my favorite finds from these places in another post.

While I was traveling, I had more time to look at craigslist than I usually do and lookie here what I found last Friday!

(Yep...mis-spelling and all.) There was little more information in the post itself and no mention of the words "mid-century, retro, saarinen, eames era" that would have flagged anyone using search tools.  Heck, even searching on "dining" wouldn't have worked on this post!  I was still out of town at the time so I sent it to my husband to arrange to go look at it on Saturday morning.  My husband screwed up his timing that day and couldn't look at it when he was supposed to--ugh!  I arrived  back home on Saturday night and we went to look at it Sunday morning. We met the craigslist guy on the other side of town at a storage unit.  The set was in his parents house and they passed on so he was looking to get rid of it. He said his parents bought the set in the 60's.  It was covered in crud but I could tell underneath it all was a beautiful set that would probably clean up.  It also has cushions but they are recovered in purple velvet so I didn't show them in the picture.

If my husband had gone alone, he probably wouldn't have bought it so I think it was fate that I was here to see it.

It's not a Saarinen or a Burke but it's a very good reproduction from North Central Industries of Johnson Creek, WI  (who?--does anybody know anything about this company?).  I don't care because the table and chairs are in really good shape and it has very minimal rust (nothing that a new paint job won't fix).  All the chairs swivel very nicely after a shot of silicone spray.   The chairs are fiberglass and there are no cracks.  And we negotiated the whole set for $300--woo hoo!  As you can see the set cleaned up beautifully. 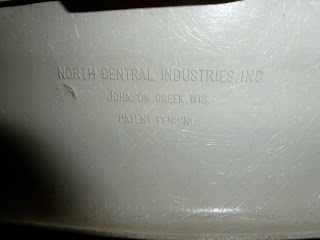 I'm so excited...I never find anything good on craigslist around here!  Even our children love it and think it's cool--now that's a shocker!  Now I need to read Pam's post on how she fixed up her vintage tulip table and shell chairs.

In case you are interested, here is a picture of the furniture this set is replacing:
I was actually kind of sad to part with this set.  It's Nichols & Stone--high quality stuff.  I bought it about 15 years ago when my tastes were so totally different and it's held up beautifully.  The table had a solid cherry top and the chairs were all solid wood as well.  It looked nice in our previous home (a 1930's Tudor) but it was so out of place in our MCM home.  The good news is that my mother wanted it for her home so it's still staying in the family.  Am I the only one who is attached to their furniture???  It's a sickness...