Adventures in Stripping: Wallpaper, that is...

Where did we last leave off...oh yes, we were about to strip wallpaper.   The old wallpaper was more of a wall-covering.  It didn't have a print on it, just texture.  It was really non-offensive but taking down the drapes and installing new countertops had damaged it and left holes in it so it had to go.   Plus it was peeling off the wall in areas where the previous owners had some leakage from the roof.  AND I saw black stuff in those areas which I suspected was mold.  This wallpaper really had to go. 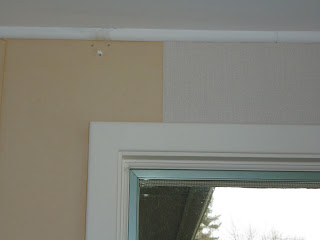 At this point I thought this job was going to be a breeze.  My inner voice went something like this:

"Oh, this is going to be easy--our steamer will take this paper off like nobody's business."
"Wallpaper...you can't stop me.  You really don't know who you're dealing with."
"We are wall-paper removal experts!"

Well, my false wallpaper optimism and bravado was short lived.  Because that paper backing turned out to be FROM H*&%!

We have plaster walls.  And that paper was stuck directly to the plaster with about 10 gallons of glue.  We first had to steam all of the paper off and it came off in about 1" strips--taking CHUNKS of plaster with it.  Then we had to STEAM THE GLUE!  I have never had to steam the wallpaper and the glue in separate steps over an entire room before.  After the second round of steaming, there was still a good bit of glue on the walls so we brought in the big guns--TSP cleaner.  We had to wash the walls 2 times and let it all dry.

After that, we looked at our horrible plaster and were trying to figure out what to do.  The right thing to do would have been a skim coat but we didn't have much success with trying that in our bathroom plus we were on a time crunch so we decided to repair the worst patches and leave the rest to "character".    Plus there isn't a ton of wall space in this kitchen so we didn't think the rough walls would be hugely noticeable.

After repairing our walls the best that we could, we started painting.  We primed the walls first in case there was any glue left on them and to start with a blank slate.  We wanted our house to have some flow and we are tired of having 25 different paint cans in our storage area so we decided to pick a color from another room.  Our kitchen flows into the great room so we decided to try that color.  The large sample we had looked pretty good in there so we thought "why not".

The color was BM "Cashmere Gray".  Sounds innocent enough, right?  It looks nice in our great room.  It looks nice on sample and with our cabinets.  Well, it looked like crap in our kitchen.  And here is why:

See our subway tile?  Our subway tile is original to our house.  Yes, they had subway tile in 1965.  I've seen websites that say it isn't mid-century and I'm here to tell you it is.  We thought it was much whiter than that.  Check out this picture below--looks pretty white, right?  And that was with a pure white laminate counter.  At least we thought so.


Well, Cashmere Gray made our subway tile look like a dirty beige.  Dirty--not pretty.  After stupidly putting on the first coat of the offensive color, we decided that "it wasn't working" and we had to switch directions.  This was at 9:00pm on a Sunday.  Luckily Dex had off work the next day (some government holiday) but I didn't so decisions had to be made quickly.  I have about 50 million swatches of BM paint so we quickly made a decision:  Let's try Revere Pewter.

And my poor husband is tired of painting.

But we decided to risk it.  And boy and I happy we did because here is how the kitchen turned out. 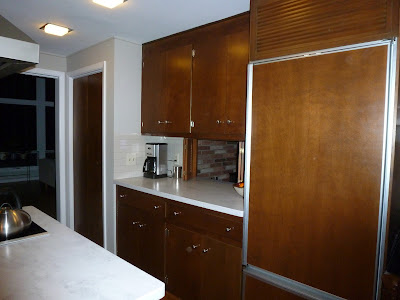 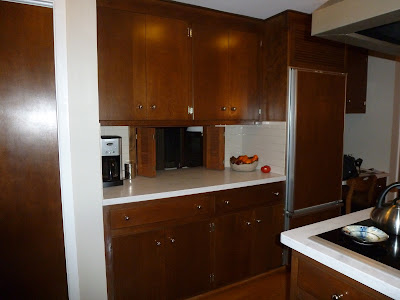