February 23, 2013
There was a significant update to our kitchen that took place a year ago, but I forgot to mention it.


Our kitchen's hood was painted a deep reddish orange when we bought the house.  It matched the previous owner's drapes, the canisters, and a stripe in the green carpets that were in the kitchen.  I loved it for them, not for me. 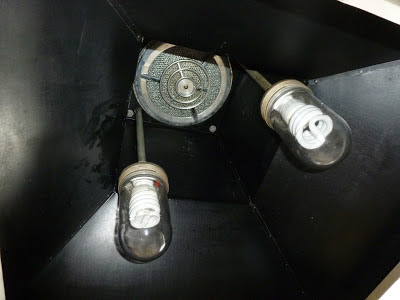 Close-up of the old fan: 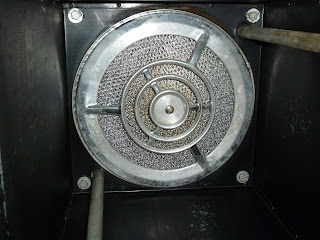 The hood was such an eyesore to me.  In hindsight, it probably wasn't that bad but the combination of all of it was just way too much.  In addition, the Nutone fan in the hood didn't work anymore.   Well, it actually did "work" if you moved the switch to the "on" position and then waited awhile.  You would hear a very slow hum, then it would eventually get faster and faster and spew black soot and particles all over your food on the cooktop.  Something clearly had to be done here.

The first thing we did was take down the hood.  It was relatively easy as it was hung by 4 bolts in the ceiling. Note the rods and wiring--that is for the light fixtures that hung inside the hood. We put plastic in the fan duct to prevent anything from coming in the house as we had taken out the damper. 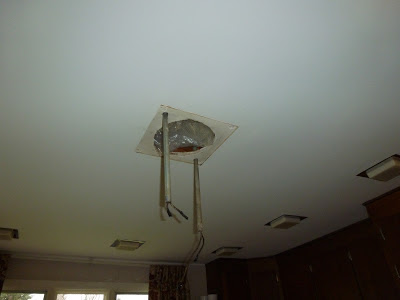 Here is the hood sitting on our kitchen floor after we took it down.  It is steel but not too heavy. 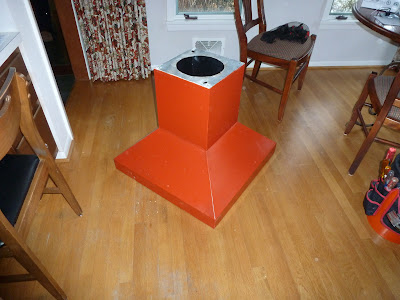 It was winter so we couldn't paint it outside.  Here is Dex prepping the hood in our basement workshop.  We decided not to repaint the interior as it was black already. 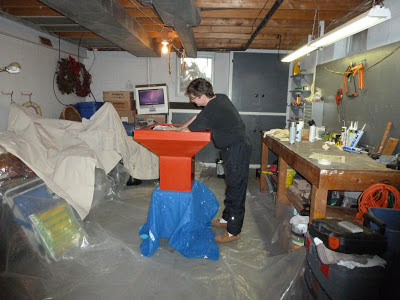 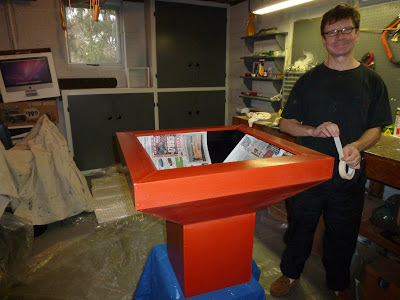 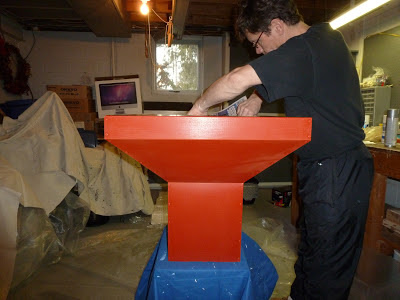 We decided to try to spray paint it silver to look like stainless steel.  I went to Home Depot and they allowed me to test the cans to see which "Silver" looked just like stainless.  I ended up with Rustoleum's Aluminum Color after comparing it with the stainless appliances in the appliance section.

Dex first primed it with Rustoleum "Clean Metal" primer to make sure the new paint adhered to the old.  And then he painted the piece with a couple light coats of Rustoleum High Performance in the Aluminum color. Here is the primer and top coat that we used. 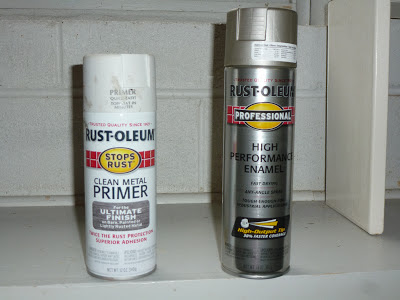 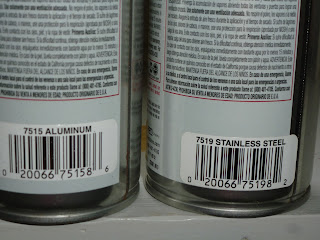 Painting the hood was actually the easy part...Next we had to install a new fan.  I found a very similar NuTone fan online and went to our local electrical supply (Maynard's Electric) to see 1) if the old fan could be repaired and if not 2) if the new one would work in the space.  The old fan couldn't really be repaired easily so we decided to go with the new one.  And guess what--the new fan and the old fan were virtually the same--minimal updates were made in the last 50 years!   Sadly, some parts that were originally metal were now plastic--including the grill.  And some parts had been combined into one assembly in the new fan.  I seriously doubt this new fan will last 50 years.  The new fan cost about $100 and off we went.

So now we had to hang this new fan from its new straps inside the vent hood.  It all had to be done at the same time due to the way this thing was constructed.  This was not fun.  "We"/Dex had to:


Attach the fan and the hood together to the ceiling while

Sitting on a makeshift wooden platform covering the island cookstop

While working inside the hood in the dark above his head

With no way to see what he was doing

I think Dex would have rather had a root canal.  I likened the pain to giving birth.  (The birth story comes in handy at times like this.)  I did step in for awhile to try my hand.  We took breaks to ease the frustration.  Expletives may have been involved.  It was bad....but we prevailed in the end!!!

At this point, the hood was up, the new fan was in and working.  We decided to re-attach the original metal grill as I thought the beige plastic one would become disgustingly coated with cooking oils very quickly.  The last part was to reattach the lights. The wiring was really short.  The fixtures were something that I have never seen before.  They pretty much look like mason jars with electrical components.  Oh well, they do the trick! 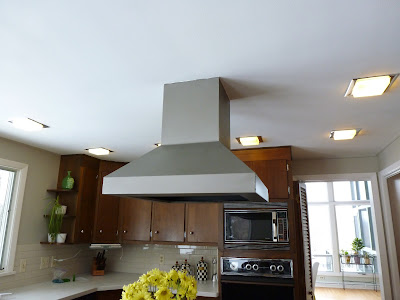 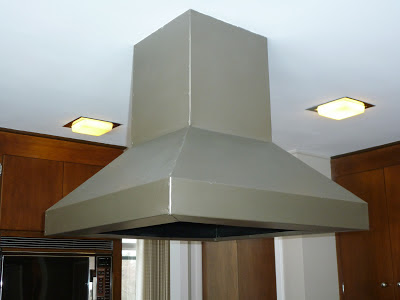 It's a dead-ringer for stainless--everyone is shocked that it's painted!  So for an investment of about $120 (fan plus paint), we have a hood that looks practically brand new.