February 16, 2013
This kitchen update is actually a pre-quel as we did this work a little over a year ago.  The pictures you are about to see if before we got our new counters--we still had the white formica.

The cooktop that we had was original to the home and still worked quite well.  It was a GE stainless steel electric burner cooktop.  Here's what it looked like: 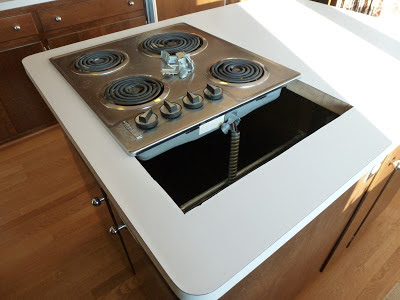 Do you see the problems?  Although it worked well, it was like cooking on a camp stove. It only had one large burner and the other three were small.  The cooktop was only 24" wide!  The knobs only had 4 settings and if you turned it in between them, it turned the burner off.  More than once, I found myself in the situation where I couldn't find a setting that would make the pot boil without boiling over because of the lack of cooking control.  The other problem was that I really prefer cooking on gas.  That was a lesser requirement, though--I had to be able to make a decent meal on my cooktop.  I have no idea how the previous owner cooked on this thing for 45 years!

We had a couple of options:
1.  Run gas up to the island from the basement and install a gas cooktop.  We didnt' choose this option because I would have lost storage in the island.  The main concern for me was losing the drawers right below the cooktop as I store all of my cooking utensils there.

2.  Install an induction cooktop.  Induction technology is very, very cool.  Basically, it cooks only where you put the pot.  And you can put the pot anywhere on the cooktop!  Because of the way induction works, the cooktop stays cool while cooking your food in the pot.  It sounds crazy but it works.  We ultimately decided not to get the induction cooktop because it would have cost twice the amount of the electric one.  You need the proper cookware for induction (which we didn't have) and the induction cooktop cost $700 more than the electric version.  So it would have been an incremental $1000-ish investment.  I've heard that induction is a lot like cooking with gas so if we had had the budget, I would have chosen it. 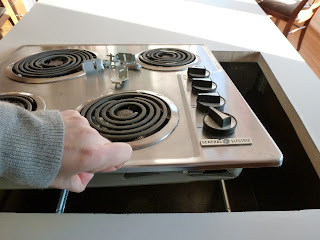 Removing the cooktop was quite easy.  It was simply being held in with 4 clips that were screwed in from below the formica.  You can see the clips as they were piled in the middle of the cooktop after removal.

Then we had to enlarge the opening in the formica with a jigsaw to accommodate the new 30" cooktop (the old one was only 24".  The formica cut easily but I don't have a picture of the new opening.

Enter the winner--a sexy Bosch electric 30" cooktop.  Lowes was having a 10% off all appliance sale and we had a 10% Moving coupon so we got it for a good price.  I love it because it matches the black of our dishwasher and the black of our wall ovens.  It instantly updated the kitchen and says "Hey, a semi-serious cook lives here!"  Here it is in it's new home!  Ahhh...much better. 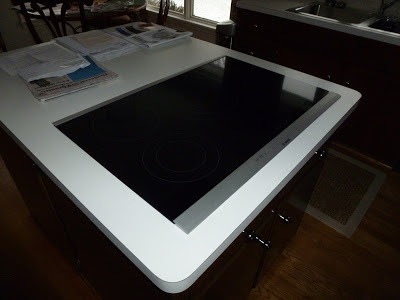 We actually had the guys from Lowes install it.  Installation was cheap and I wasn't sure of the electrical connection so it was worth spending a few bucks to make sure it was done right.  In hindsight, it was really easy and we could have done it ourselves.  But we didn't spend much having them install it so it was worth getting an hour of time back in our day.

A year later, I have to say that I really like this cooktop.  It works well and it was a couple of burners that adjust sizes, which is convenient.  It is harder to keep clean than it looks however.  We clean it every time we cook and it still looks good as new.  But there have been times when I've had to take a razor blade to the surface to get the burnt food off.  I wouldn't recommend the glass cooktop if you are either a very messy cook, don't feel like cleaning it all the time, or do a lot of cooking with sugars (like making jam or jelly).  The reason why is the instructions warn about sugary substances adhering to the surface. If you don't get them off right away, they could permanently adhere.  If I were to make jam, I would be very, very careful. It just depends on how pristine you like your house to be.  I like pristine.

Here are some pictures from today.  (Note the change in countertop.)